Several years ago I worked at a picture framing business with a guy named Matt.

Matt collected artwork and objects created by or associated with mass murderers.

These types of collectibles are classified as Murderabilia.

He had quite the collection of Murderabilia and often referred to it as his nest egg for him and his daughter.

Yes, many of these artifacts have value and can fetch a nice sum of money. Just like any collectible. I can imagine that the story, intrigue and historical value of Murderabilia can make it more valuable than collectibles such as hummel dolls or concert posters.

One day, around the holidays, Matt brought in a Christmas card to frame.

Not unusual I guess. Until he told me who the card was from.

So you may be wondering… how in the hell does one receive a Christmas card from one of the most legendary criminals in history?

Was Matt a relative of Manson?

As I remember, Matt spent approximately one year sending letters and post cards to Charles Manson. Apparently Manson is a little selective about who he corresponds with.

So after a long period of time sending mail letters Manson finally began to write Matt back. I believe they even talked on the phone occasionally.

Strange indeed. But I find what intrigues others fascinating.

I used to hang a bunch of wrapped photos in a grid across the wall in companion to my monthly exhibitions. These images ranged from dark industrial to colorful and decorative.

I would always the guest, when purchasing the print, why they chose that specific image from the rest. It was important for me to know what triggered something in their mind. What compelled them to want that object communicating that image. 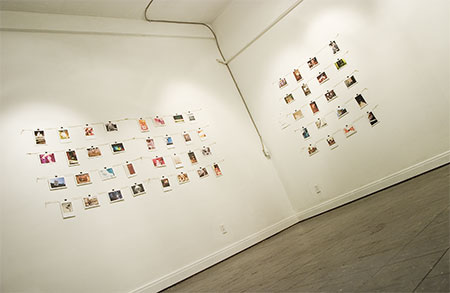 Artwork and objects we collect, like fashion, say something about who we are. Thet reflect those little things that trigger our interest, passion or obsession.

To each his or her own. Some folks collect mid-century modern furniture. Others like Matt collect Murderabilia.

Do you have a passion or obsession to collect anything in particular?

You will be awarded bonus points if you collect something weird.

Get updates about new art and photography releases. Plus exclusive discounts for your art collection.